DO SOMETHING BEAUTIFUL. BE THE BRIDGE. 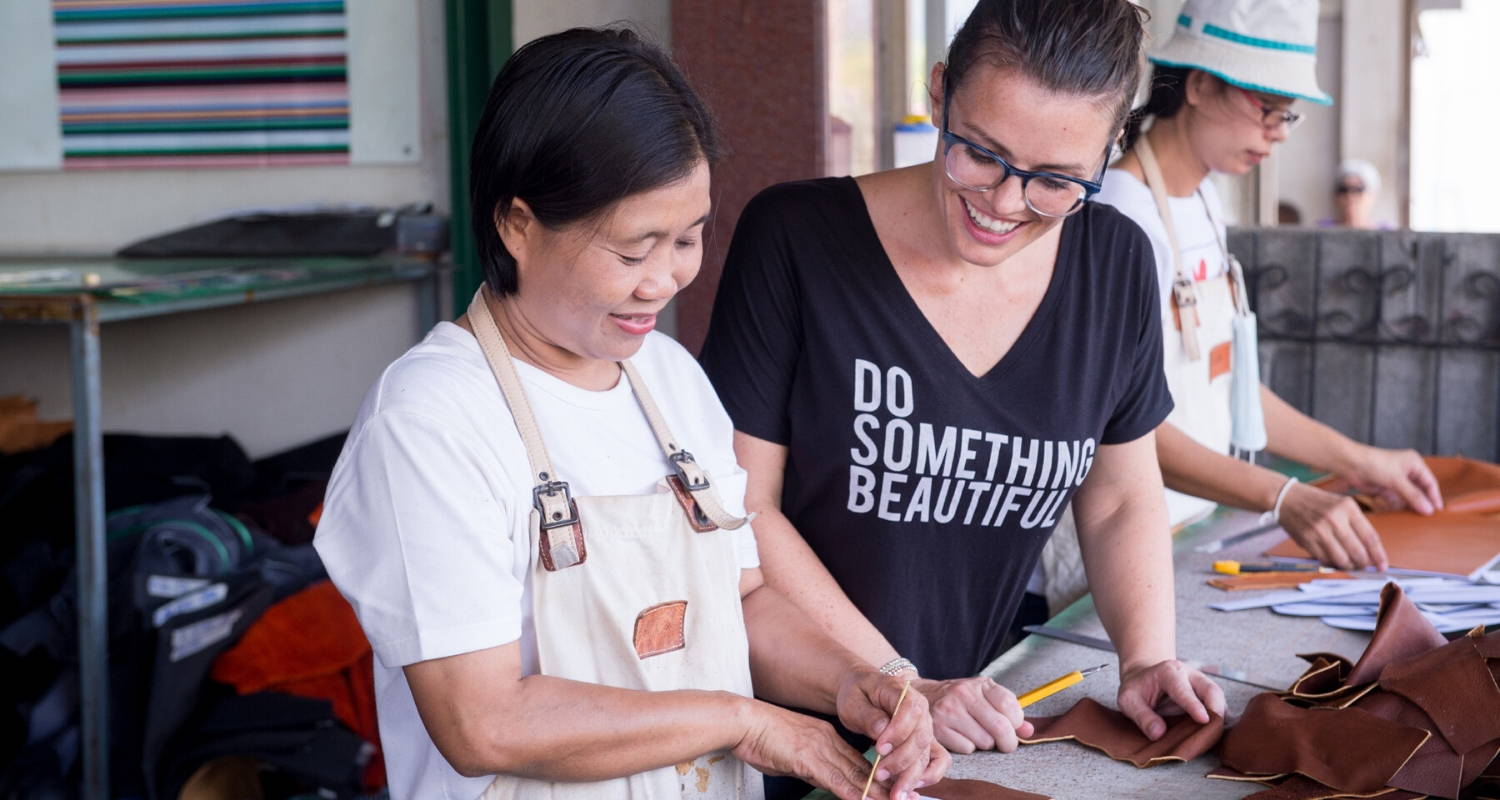 Each Sapahn piece is handcrafted by 22 artisans in Thailand who earn a fair wage and are able to achieve financial independence through your purchase.

For over two decades, Sirichai and Kay have been artists bringing handmade leather bags to life in Thailand. And for almost a decade they have been working with us at Sapahn. But before we get into how Brooke stumbled across Sirichai and Kay, we need to rewind to how these two Thai artisans got into leather products in the first place. 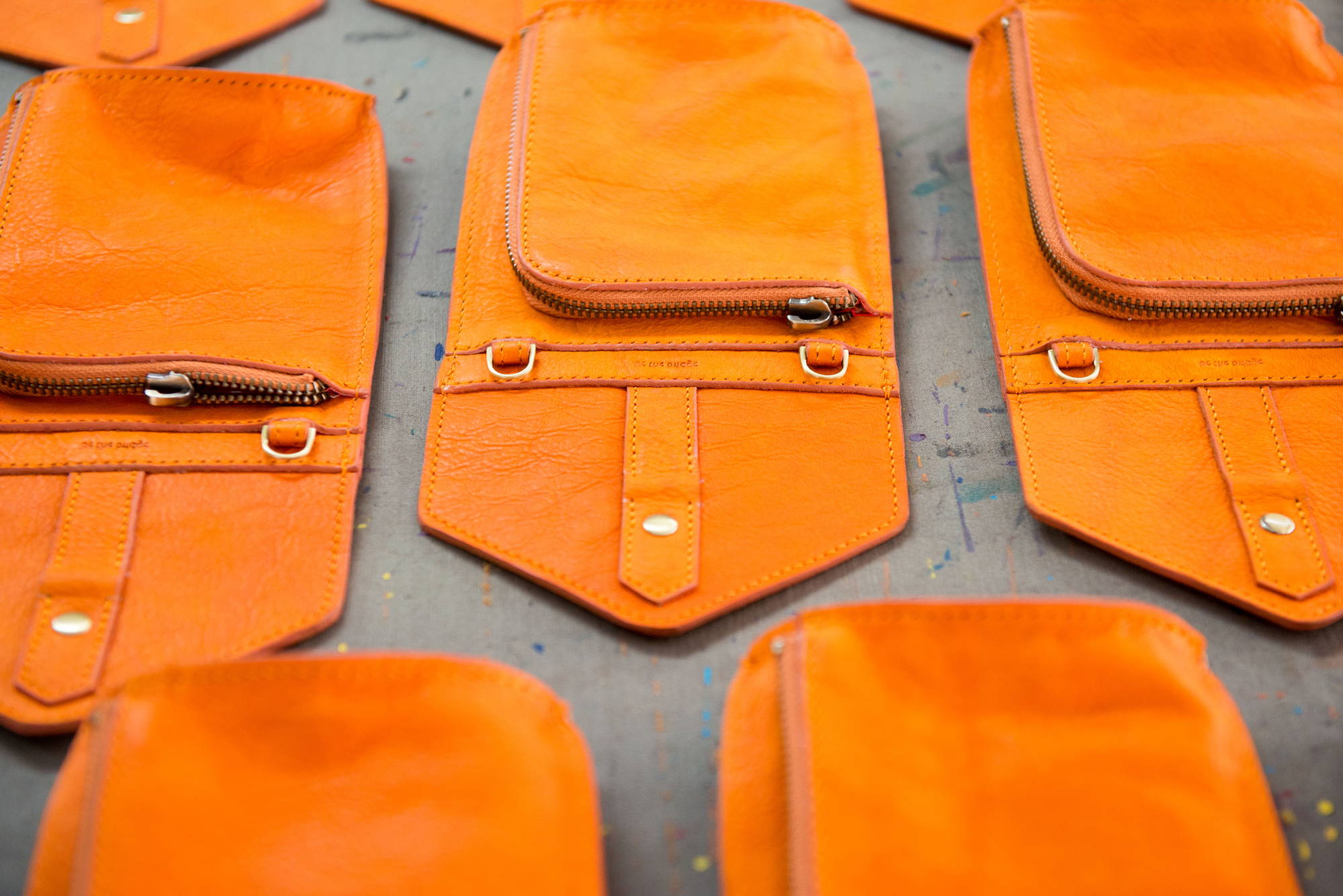 Kay and Sirichai met while studying art at university in Bangkok along with Sirichai's best friend P'Ti. Sirichai has a love for leather and began selling his craft at local markets throughout college. After a few years of establishing their craft in local markets, the trio travelled back to Kay's village in central Thailand to open up a leather studio and began taking orders and employing others in the village.

Of course, as in any classic story, P'Ti then fell in love with a local woman in the village and the rest is history. His love for her and the village lifestyle is what has kept him there for the last two decades, growing the studio with Sirichai and Kay to a total of 22 artisans today who are like an extended family. 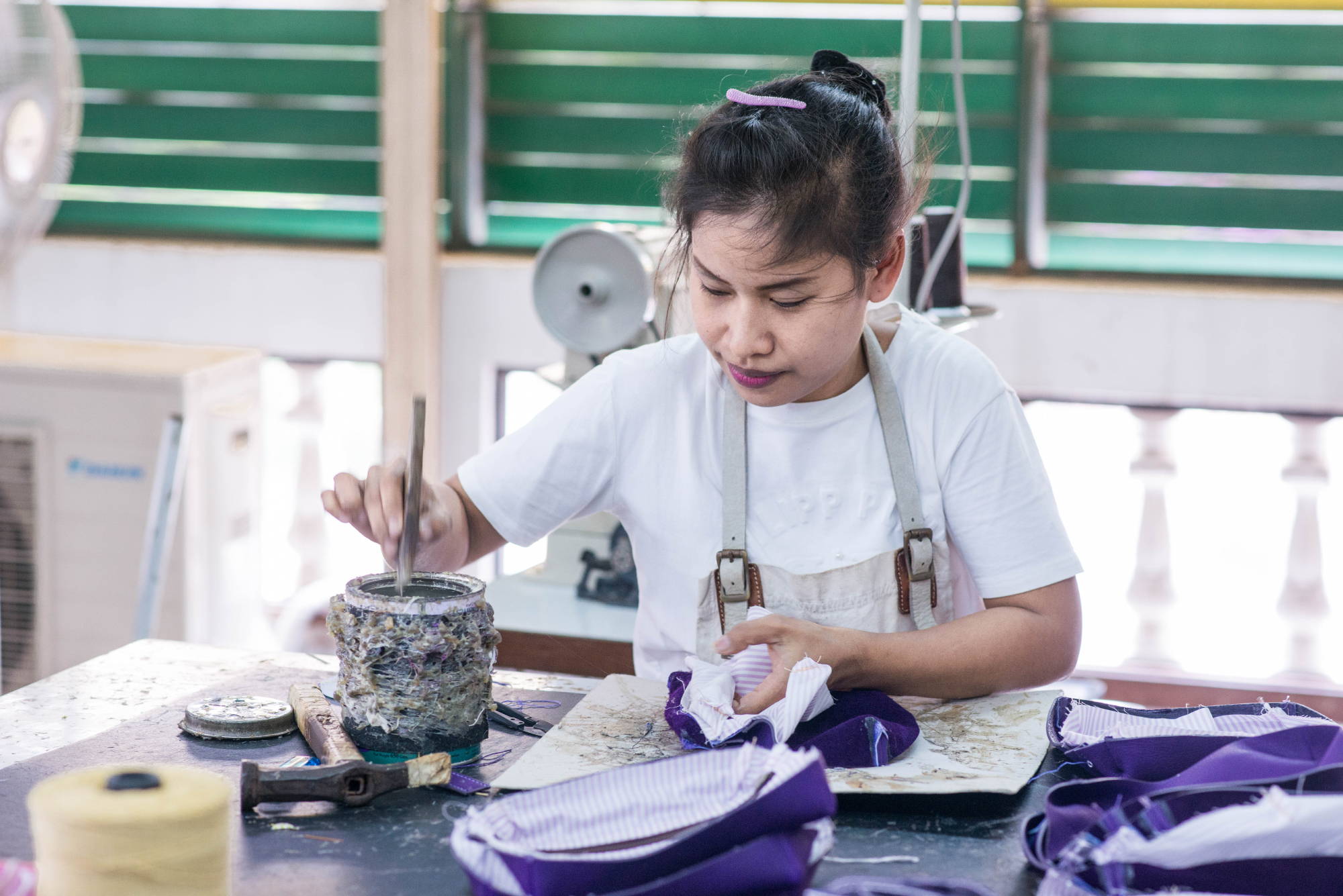 Many of the artisans have been working together for 18 years, others for at least a decade. Many are married or related to one another – which we've always thought was an amazing sign in of itself. Something must be pretty great if you want to share with those you love the most.

OUR HISTORY + HOW WE MET

Brooke saw Sirichai and Kay's beautiful, colorful leather handbags at a local market in Thailand. Now, for those of you who know Brooke, you know she is always striking up random conversations with people, getting to know them, what makes them tick, and who they are at their core. This is exactly how her friendship began with Sirichai and Kay.

She was moved by their passion for their craft, especially the thoroughness given to every detail and thought put forth to making their craft one of quality.

Sirichai and Kay were a little taken aback by Brooke's interest in wanting to know more about WHO the bags were being made by in the village, what were the working conditions, how they were paid, etc. At the start, this probably felt intrusive. But over time, Sirichai and Kay realized it was for good reason.

After a year or two, Siricahi and Kay realized that Brooke was serious about learning more about how each piece was made, but equally as excited to meet the women behind the bags, so they agreed to take her to the village to see the leather studio and meet the rest of the artisans. The moment that Brooke got a peek behind the scenes at the studio, her creativity was off to the races. She began tinkering with the leather hides and hardware samples she found in other local shops in Bangkok.

As glamorous as that may sound, the truth is, Brooke's design process started by designing bags using paper, staples and tape (and perhaps a dash of 'I really can't study anymore' brain power as this was during the time when Brooke was meant to be writing her Masters thesis.) 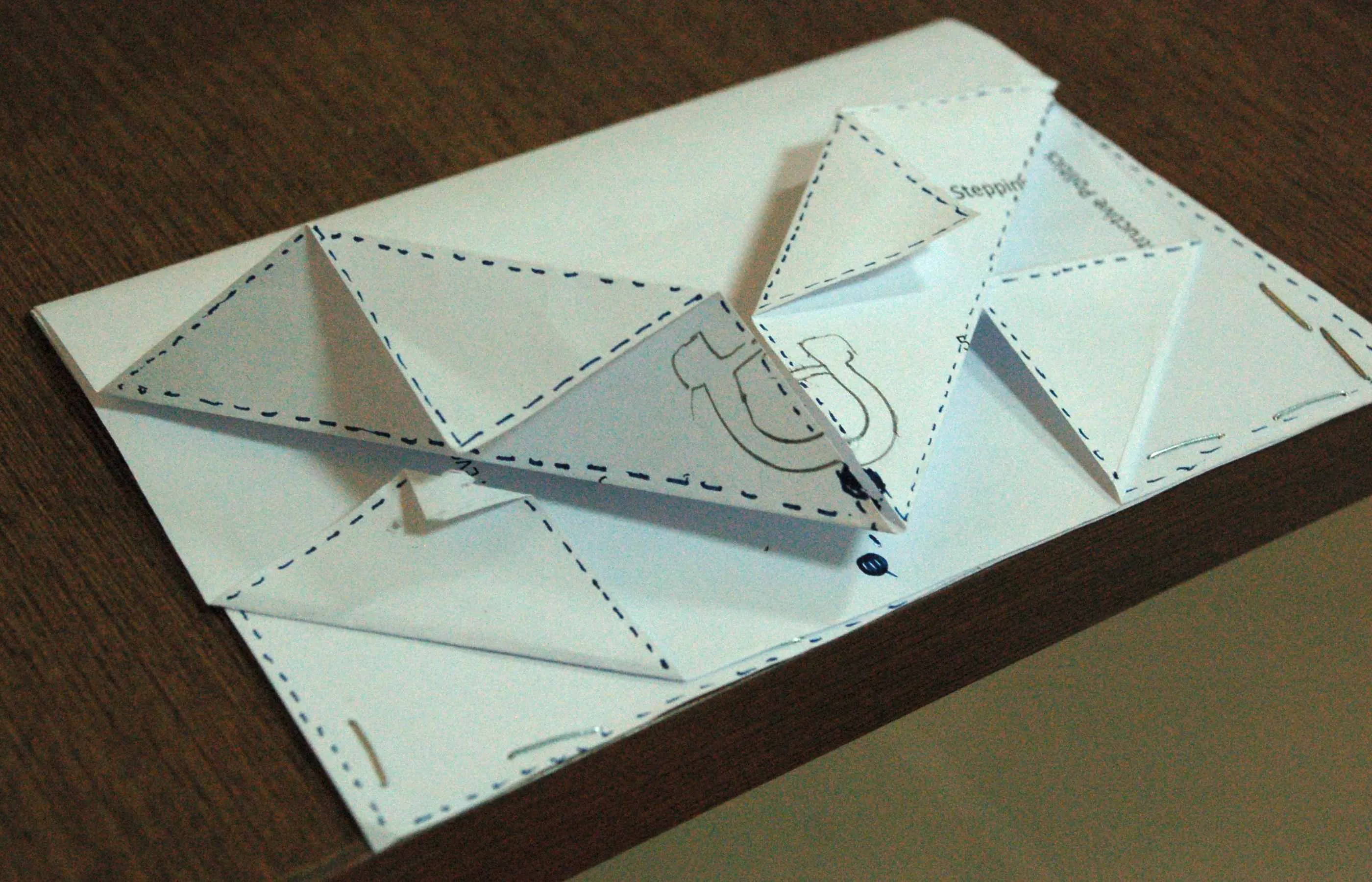 After a lot of time spent experimenting (and badgering her thesis-writing colleagues to look at her paper bags), the first Sapahn designs were born. Weeks were spent working on bag designs, testing prototypes, finding gorgeous colored leather, and locating the perfect hardware – you'll recognize this as our signature Omega on each bag, which was the first piece of hardware Brooke was drawn to.

Not only was the Omega aesthetically appealing, it was functional and could double in some cases as a handle. If you're familiar with Sapahn, then you've met our M Crossbody which is the first bag in Brooke's collection, givign the Omega hardware that double feature – appealing and functional.

We didn't even know we were making the Omega a thing when we first added it to our bags until we left the Omega off some of our bags a year later – and oh boy did we get the third degree about it from you all – we'll never make that mistake again! (Don't worry, we totally agree with you, the bags are waaaay better with the Omega on.)

The M Crossbody is the bag that everyone has always absolutely loved and we've had endless compliments on. But among all that, there is one compliment which has meant the most to us, and it came from Sirichai and Kay themselves. 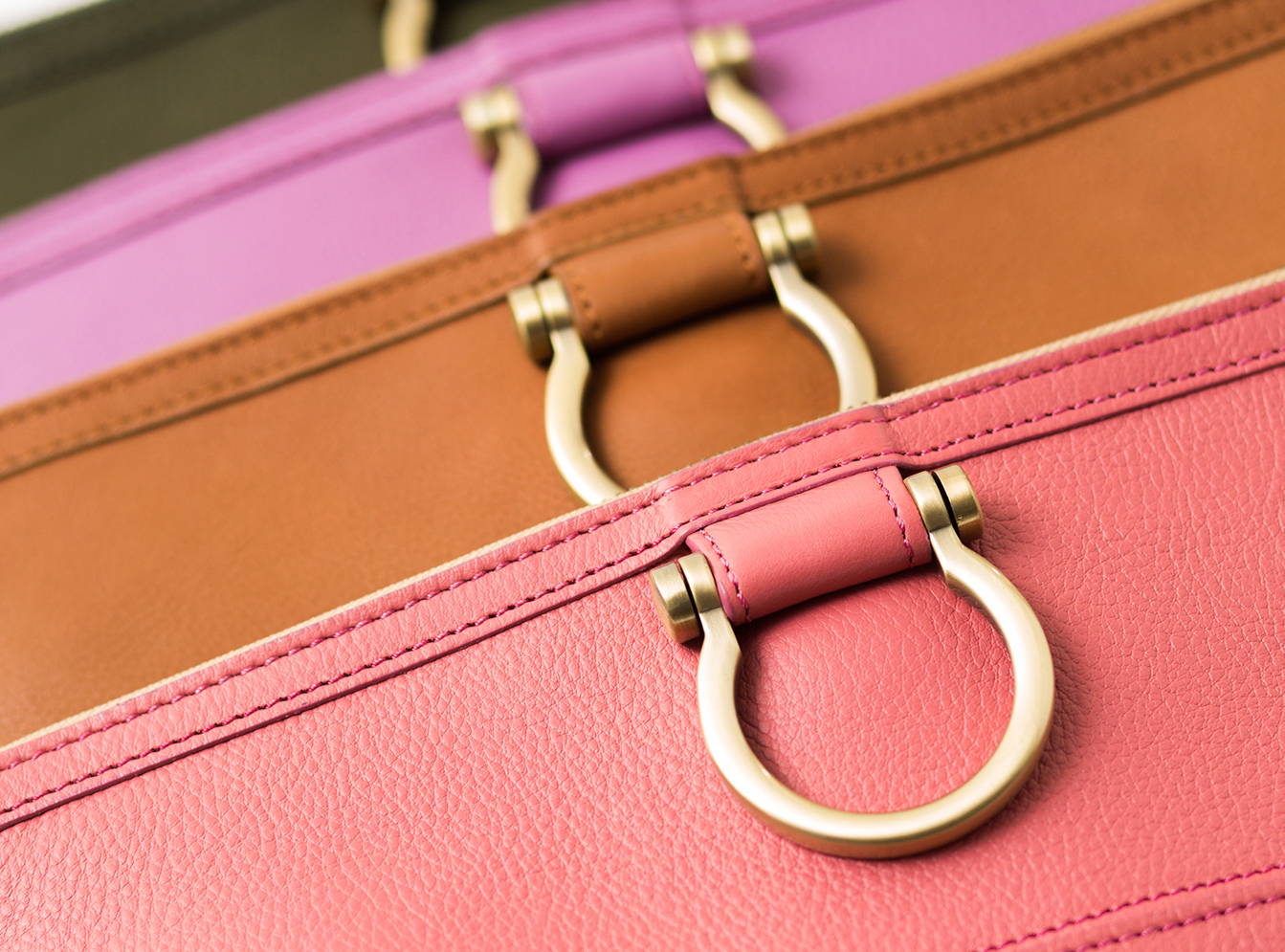 We had been working with them for a few years when Brooke joined Sirichai and Kay on a trip to the leather studio. The 3-hour car journey was the perfect opportunity to get to know them even more. One of the things Brooke had always been curious about was what made them take a chance on working with a small-town girl from Nebraska?

Sirichai's answer was simple: 'Because you care. We see you are like us. You love this for the same reasons we do.' Sirichai and Kay had previously walked away from a bigger opportunity from a larger retailer because the retailer wanted to put business ahead of people. They wanted to push for faster turn-arounds, higher profits, lower costs. Sirichai and Kay bravely said no, unwilling to compromise on their family, community or values.

*We've changed our artisan's names to protect their privacy.

BE A BRIDGE BUILDER. SHOP SAPAHN.


Back to the top
Your are successfully subscribed for email notifications.
✖

Notify me when available

We will send you a notification as soon as this product is available again.

Your email is requried